IAT ROAD
Transport and logistics of chemical and dry goods

It was 30 years ago on December 1 that IAT inaugurated its ground-breaking tank cleaning facility in Kolding. It was placed strategically close to the E45 motorway and that’s still a great location in relation to a major traffic artery. In the beginning in 1986, the facility was a single lane and there was a bit of excitement as to where the first customers were going to come from. Was the potential really there? Could we attract customers?

The customers came and the facility has since been expanded and updated and today it consists of 3 lanes, including one that’s outfitted for the cleaning of food grade tanks according to HACCP regulations.

In the intervening years, we’ve implemented and achieved certifications from the chemical and foodstuff industries.

Today, the facility has seven employees and has, through the years, cleaned countless thousands of tankers, tank containers and IBC units. Over time, we’ve also implemented a more complex IT system. In the beginning, there were paperwork instructions and registrations as well as thick binders for everything. Today, it’s all registered electronically.

Customers come from near and far and many different nationalities visit the facility, where the drivers can have a shower and a cup of coffee while their tankers are cleaned in one of the three lanes.

IAT has raised the flag in Kolding and there are some goodies for the customers who stop by the facility to see us today. 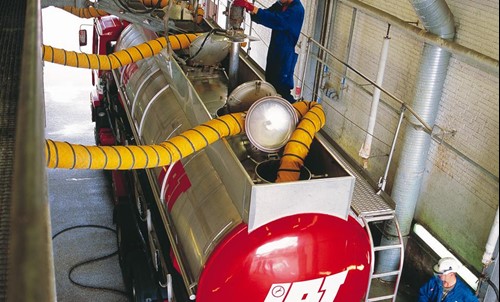